Apropos of nothing really, we hear periodically about the threat posed to western nations by returning jihadists brutalised and further radicalised by fighting for ISIS/ISIL/Daesh – call it what you will.

At Castello Italicus we have read our history and don’t really see any major problem.

After a bitter fight at Stalingrad in 1943 the German 6th Army was surrounded and starving.  The Russians killed the lot (except for a few) in total around 1,000,000 men in the whole of the battle.

That was it for the Wehrmacht, from that day on their war was lost and it was only a matter of time.

The Russians lost appalling numbers of men as well, mainly because they began the battle desperately short of everything and their main tactic was simply to keep throwing waves of ill equipped teenagers and pensioners at the Germans in the hope they’d buy some time.

But to get back to our lesson from history, the only possible way to finish the jihadist menace is to surround them (pretty much done now) and simply make sure that none can escape.  Cut off supplies and wait until they all die.

It is brutal and far from the sporting sort of warfare we like.  But if we don’t do it this way we’ll have to do it again, closer to home.

No foreign fighter must  be allowed out, except in a box.  And not even then.  Don’t release the names of those killed.  Bury them in a trench by bulldozer, perhaps burning the bodies first to deny the possibility of DNA identification. 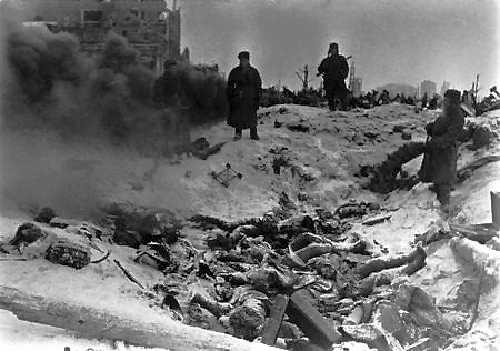 This is a war the Russians would appreciate.  Perhaps we should put them in charge for the duration.